Home » Video » DaBaby shows off himself eating meal, while in Boogeyman costume, from his “Baby On Baby 2” album cover [VIDEO] 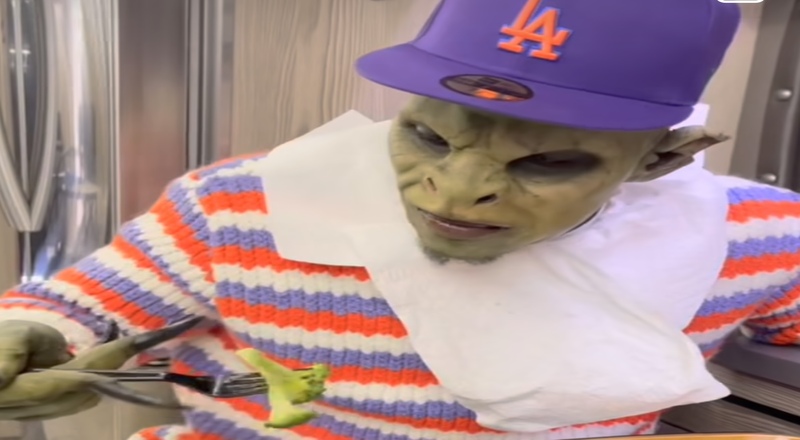 A week ago, DaBaby released the second installment of his “Baby On Baby” mixtape series. This project contained 14 new songs, as well as an appearance from Anthony Hamilton.

DaBaby also drew controversy on his “Boogeyman” song. This was due to claiming that he had sex with Megan Thee Stallion, on multiple occasions, back in 2020. This includes the day before Megan came out and claimed that Tory Lanez shot her. DaBaby even went on to use a Megan Thee Stallion lookalike, for the Boogeyman video.

Now, DaBaby is taking his Baby On Baby 2 promotion to the next level. The Charlotte rapper recently went viral for eating shrimp and steak, in his Boogeyman costume. Many viewers were impressed with the makeup used for this costume, while many others laughed at how DaBaby is still in this costume.

Last week, DaBaby also announced his “Baby On Baby 2″ Tour. This will kick off on October 27, in Minneapolis, MN. 13 dates will be available, as it’ll conclude in Atlanta. More dates will still be added.

Check out DaBaby eating in his Boogeyman costume from his “Baby On Baby 2” mixtape cover and in his latest music video, below.

Continue Reading
You may also like...
Related Topics:Baby On Baby 2, Boogeyman, dababy, featured

More in Hip Hop News
Russian rapper Walkie commits suicide, after being drafted for Ukraine war
Ari’s Snapchat was leaked and a photo of Moneybagg Yo was shared [PHOTO]