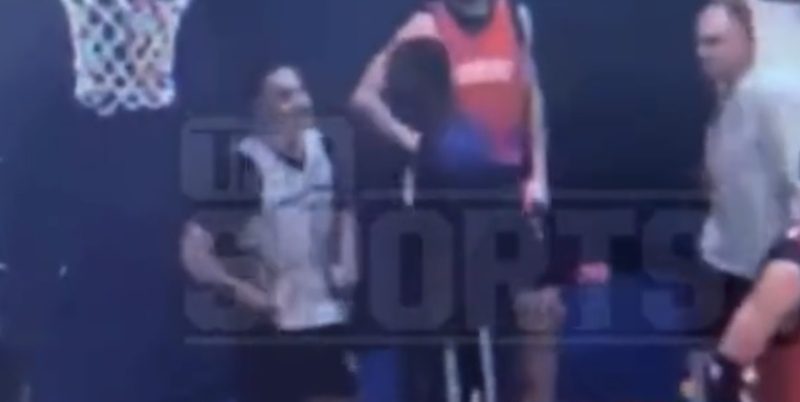 On Wednesday, news began to surface, that Draymond Green threw punches at fellow Golden State Warriors teammate, Jordan Poole. This was reportedly during a practice, as Draymond left the facility. He’s said to have apologized to the team on Thursday, but didn’t join them for practice.

Now, video of the physical altercation between Draymond and Jordan is going viral, as obtained by TMZ. Small pushes were exchanged, and that’s when Draymond decided to throw punches. As Poole went to the ground, Draymond continued to attempt to land even more punches on him. It’s unclear what exactly was said, that resulted in this incident occurring.

Stephen Curry has since denied a rumor, of what may have possible started the fight. There had been claims that there was a change in Poole’s attitude, regarding his contract negotiations. Curry called that rumor “absolute BS.” As for possible legal action for the altercation between Draymond and Poole, the San Francisco Police Department told TMZ that they aren’t investigating it.

Meanwhile, the Warriors are still a heavy favorite, to win the NBA Finals again. Last season, they won their fourth championship since the 2014-15 season, after defeating the Boston Celtics, in six games.

TMZ obtained the video of the altercation between Draymond Green and Jordan Poole at practice https://t.co/55rMnBqAVG pic.twitter.com/k02BGsBo8G

More in Hip Hop News
Man sues Antonio Brown, after paying him $160,000, for fake Richard Mille watch
Kanye West beefs with Diddy in text messages posted to Instagram, as Diddy asks for address so the two can speak; Kanye asks Diddy to do something “illegal” to him