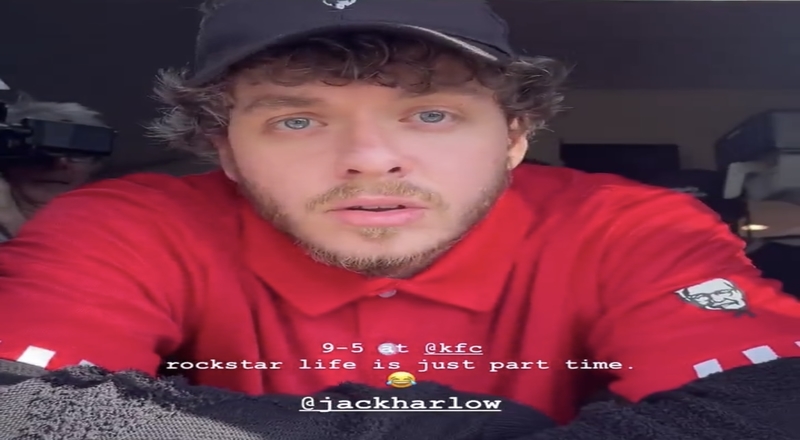 A few days ago, it was revealed that Jack Harlow is having his own meal, coming to KFC. This is the “Jack Harlow Meal,” as it will be available at KFC locations, on June 6.

Harlow recently appeared at a KFC promo event in Atlanta, for the meal. However, the Louisville native was also seen working in a drive-thru area of one KFC location in Atlanta, in the Smyrna area, as he promotes his upcoming meal.

Also, a fan ended up recording a video of Harlow working in the drive-thru, as the caption in their Instagram stories said “9-5 life at @KFC. Rockstar life is just part time. @JackHarlow.” The Jack Harlow Meal contains  the KFC Spicy Chicken Sandwich, mac and cheese, Secret Recipe Fries, a side of ranch, and lemonade. Harlow is a Kentucky native, which makes the KFC collaboration, a perfect fit.

Harlow’s upcoming meal at KFC also comes after he released his sophomore album, last month. This was “Come Home The Kids Miss You,” as it went on to debut at number three, on the Billboard Hot 100 chart. The album was led by the chart-topping “First Class” single. Harlow also worked with Lil Wayne, Drake, Justin Timberlake, and Pharrell Williams.