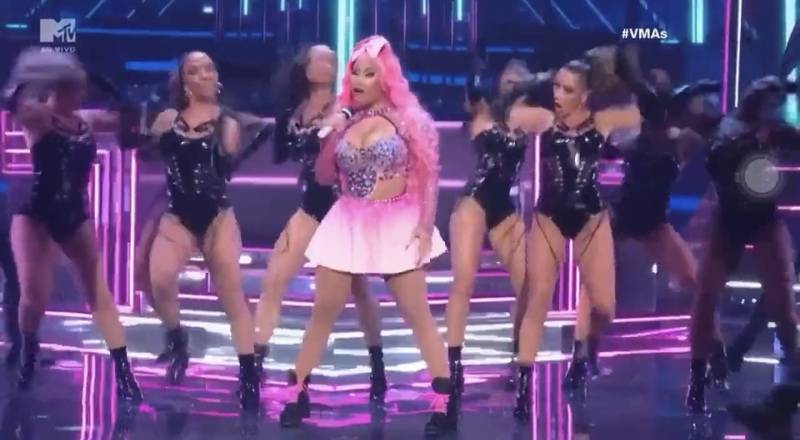 On Sunday night, Nicki Minaj was honored at the 2022 MTV VMAs. She was presented with the Video Vanguard award, as the anticipation for this moment was hyped on social media, for over a month.

Nicki went on to perform some of her biggest hits to date, such as “Roman’s Revenge,” “Beez In The Trap,” and her latest chart-topping single, “Super Freaky Girl.” Nicki went on to deliver a speech as she was also joined on stage by some of her fans, the Barbz.

Super Freaky Girl was released almost two weeks ago, as it was initially announced in July. This month, Nicki went on to add the “Super” part to the single’s title. Super Freaky Girl topped the Billboard Hot 100 chart last week, as it became the first solo single by a female rapper to debut at number one, since Lauryn Hill’s “Doo Wop (That Thing)” back in 1998. This weekend, Nicki also went on to release a compilation album of her greatest hits, “Queen Radio: Volume 1.”

Check out Nicki Minaj performing at the 2022 MTV VMAs, as well as her Vanguard speech following the show, below.

.@NICKIMINAJ accepting the 2022 Video Vanguard award at the #VMAs

.@NICKIMINAJ performing "All Things Go," "Romans Revenge," "Monster" and "Beez In The Trap" at the 2022 #VMAs
pic.twitter.com/YcJFiFIlsh

More in Hip Hop News
Jack Harlow brings out Fergie to perform “First Class” and “Glamorous” at #VMAs [VIDEO]
Nicki Minaj wins “Best Hip-Hop,” for “Do We Have A Problem?” single, with Lil Baby, at #VMAs [VIDEO]